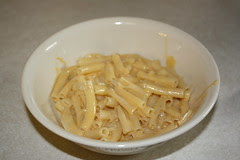 Doesn't this creamy-looking dish look delicious?! Would you have guessed that it was gluten-free & casein-free? If I hadn't been the one to make it last night, I'm not sure that I would have known!! :)
What kid doesn't love a creamy, warm, satisfying bowl of macaroni & cheese once in a while? But for some children (my older son, Ashton, included) having that satisfying bowl of creamy macaroni & cheese can make them seriously ill, or even lead to a severe allergic reaction! I will let this lead me to say that prior to going on the gluten-free, casein-free diet, my son was the lover of all things macaroni & cheese. If it looked like macaroni & cheese, he'd eat it! But when, on a whim, we decided to try the gluten-free, casein-free (otherwise known as GFCF) diet for him, he could no longer have this creamy, yellow goodness! I found lots of substitutes (every one of which, Ashton would eat) but I found them to be less than stellar and some, downright disgusting! Some even smelled like dirty socks out of the package, YUCK! I was determined to find SOMETHING that I could feed to my son that didn't leave me gagging or with the desire to throw it in the trash before he dug in. So that leads me to last night.....
Well, this delicious looking bowl of creamy goodness came pretty close and was a HUGE hit with Ashton last night! I had went to Navan Foods earlier this week and saw that they now carried both the mozzarella and cheddar forms of the Teese cheese substitutes. I, being the adventurous soul that I am, decided to try the cheddar form and use it to make my son some macaroni & cheese. As I've previously said, I find that most mac & cheese subs just look nasty and smell even worse and I have no clue how they taste because I will NOT taste them, AT ALL. In one word, I find that most are N.A.S.T.Y! Well, I knew I had the pasta at home and wasn't really sure what I would use to make it but I set off with a mission in hand; to make my son a delicious bowl of mac & cheese that wasn't gross and that *I* didn't mind looking at!
So, last night was the night I decided to make it.....
I set out my ingredients 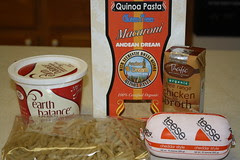 Andean Dream Quinoa Macaroni, Teese cheddar style, Earth Balance spread and Pacific chicken broth
And then I set out to make my son the most
yunmiest mac & cheese *EVER*! :)
Here is the recipe I used (I followed a tip from a fellow GFCF mom and used the broth instead of a dairy-free milk substitute .. that helped, A LOT, in regards to taste I think!)
1 box of Andean Dream quinoa pasta
1 roll of Teese (cheddar style)
2oz Pacific Organic Free-Range Chicken Broth
2 TB of Earth Balance Soy-free spread
sea salt, ground black pepper, onion powder and garlic powder (season to taste)
At this point, you get cooking! ;) I boiled the pasta according to the directions on the box. While waiting for the pasta to finish, I cut up the teese (which by the way, doesn't smell all that awful straight from the package like I was fearing it would) into small chunks and placed them in a smaller sauce pan. I then mixed in the earth balance spread as well as the chicken broth and let them simmer until the cheese was melted. Once melted, I added in the sea salt, pepper and garlic and onion powders and let it all simmer while the pasta finished. 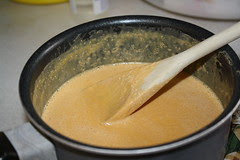 cheddar sauce once melted .... it looks pretty runny, right?
Admittedly, I was a bit perplexed at how this watery cheese sauce was going to properly cover the pasta to give my son the macaroni & cheese I was envisioning for him.

But alas, once the pasta was drained (and I rinsed it just a tiny bit) and then mixed with the the cheese sauce, I had my beautiful looking mac & cheese!! Can you believe it?!
I WAS SHOCKED!!!!
It LOOKED like normal, gluten & casein laden, processed macaroni & cheese from a box! And even better, *I* could tolerate the smell of it! It didn't smell like Kraft, but it certainly did not smell horrible either. I even tasted the sauce (that's how impressed I was, I NEVER would taste most of the subs) and I was quite impressed! It had a creamy texture/flavor and it tasted pretty good! Sure, I like my Kraft or Velveeta mac & cheese anytime, but for my son who can't have those, this was certainly what *I* considered to be a suitable replacement!
Here, you can see, that he's enjoying his macaroni & cheese! He wouldn't smile for me because well, he was too busy eating and was getting mad that I was making him look at me! LOL! 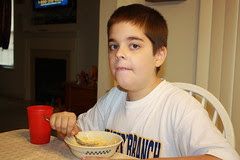 Anyways, I hope this recipe helps any that are looking for a good recipe for some good-tasting and good-looking macaroni & cheese. Since I made the entire box of pasta and the whole roll of teese, he's got plenty for leftovers and is asking to eat more of it for today's lunch, which I will let him indulge in. Now I am anxious to try the mozzarella teese for pizza and as a topping for spaghetti, yummy!!! Thanks for looking and stopping by! :)
Posted by Jenn at 10:23 AM

Thanks for stopping by and taking the time to comment. I love hearing from you and will try and repay the visit and comment as soon as I can.

Hello everyone! I'm Jenn, a Stay At Home Mom of two wonderful boys, Ashton and Holden. Ashton is 16-years-old and has Autism/ADHD and Holden is 13-years-old and has ADHD. I am also a wife to David, and we've been married for over 16 years now. Both boys are actively involved with their own little niches now, and even participate in some things together. Which is nice and easy for me, and also fosters an amazing sibling relationship. This blog is to chronicle our journey with Ashton and his Autism as well as Holden and his struggles with ADHD. It also takes you through our ups and downs as a family unit. Please respect the fact that this is a family-friendly blog. Any comments that are left that are inflammatory or derogatory in nature will be promptly removed.